Monolithic vs. Microservices: Which Architecture Is the Best Choice?

Monolithic vs. Microservices: Choose an Architecture That Is Best For Your Business

Still a relatively new development, the microservices approach to software design has grown in popularity over the last few years. But its adoption by industry giants such as Google, Netflix and Amazon has yet to topple the traditional monolithic structure that forms the cornerstone of the majority of today’s apps.

As such, the question of monolithic versus microservices is as much of an issue of whether you’ll embrace change and blaze a trail or stick to what's safe and known as it is a question of “which is better for my business?”. One factor to consider is the reputation you want your business to exude. Do you want to be recognized as a leader in change and innovation? Or would you prefer to rely on a standard model that delivers steady results?

Your answer probably depends on the market you’re targeting, as well as the product or service you're selling. But there are several considerations to take into account — regardless of your industry — before deciding which side of the monolithic versus microservices debate you fall on.

What Is Monolithic Architecture?

In civil engineering, the word “monolith” refers to a single, upright block of stone. This usually is some kind of pillar or monument. For instance, Stonehenge comprises a series of monoliths. Similarly, when we talk about monolithic software apps, we're referring to apps composed in one piece. A monolithic app is a single-tiered app in which different components act as one single unit. Typically, they comprise of three parts:

Although these modules are layered, you cannot separate them, as changes to one function means changes to the whole program.

For example, imagine you're creating an e-commerce application. Naturally, this app has a myriad of different functions. First and foremost, you'll want it to display the stock and provide inventory management tools, and also process customer orders, authorize payments and organize dispatch. As such, the app will need several different components to work, starting with a customer interface and back-end services at the very least. If you build and deploy it as one app across several different platforms (desktop, mobile, tablet, etc.) without the ability to edit separate parts individually, you will have constructed a monolith (because it is one entity).

Pros and Cons of Monolithic Architecture

There are several reasons monolithic architecture is still the default option for application developers:

However, this integrated approach is by no means fault-free. Because of how big monolithic apps can be, they have a habit of snowballing and can lead to a lack of understanding for your software engineers. Additionally, due to size, you may encounter problems with speed, as the software itself may be slow to load, and you may also struggle to locate and accurately fix errors in the code if your deadlines are tight.

The simplicity of a monolithic app can impose limitations on its size, complexity and functionality. And these apps often require extensive manual testing before rollout, making them both costly and time-consuming. They are also limited in flexibility and do not adapt well to the introduction of new technologies.

Finally, since a monolithic app is technically a single entity, you will need to reboot the entire application for each new update. For the same reason, monolithic applications can be somewhat unreliable becase a bug in any module has the potential to crash the entire app, making the whole interface unusable until the problem is fixed.

A microservices architecture breaks an app down into a collection of smaller, independent units. Instead of the app having one functional core, these separate units carry out each process as a discrete service, and all these services have their own logic and database.

Within a microservices architecture, the workload is split between independently deployable modules that communicate via specifically tailored application programming interfaces (APIs). Each service has its own function and can be updated, deployed and scaled independently of the others.

Pros and Cons of Microservices

The major pro of using smaller, independent components as opposed to one extensive system is that it’s less bulky and less buggy. Additionally:

However, as we mentioned, microservices are still relatively new, and they can be much more complicated than monoliths. They are also often harder to test because it’s more difficult to isolate faults when there’s a lot more code to sift through. Therefore, at the present time, microservices are a more appropriate choice for organizations that can employ a team of tech experts or individuals who have received extensive training.

Monolithic vs. Microservices: Which is Best for Your Business?

A monolithic application may the better choice for you if:

Conversely, if you already have experience working with microservices, or you need more from your app — e.g. complexity or modular scalability — you may want to consider the more modern microservices approach.

Whichever approach you take, upkeep is essential. Make sure you have the capability to maintain your applications so they continue to be useful and efficient.

If you want to build something more complicated than a monolith has the scope for but you’ve never worked with microservices before, then IT training can set you on the right path.

ExitCertified has delivered expert training on all things IT-related for almost twenty years. Our self-paced, virtual classes allow you to learn at your own speed and grow in confidence with different aspects of technology — even ones you've never encountered before. 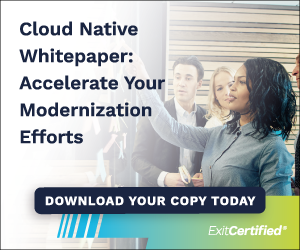